Hem » arkeologi » The History and Excavation of Ugarit

The History and Excavation of Ugarit 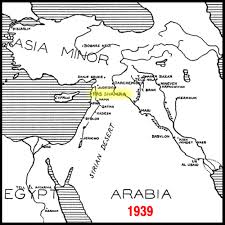 Ugarit, modern Ras Shamra was an important maritime city situated in the Northern part of Syria. During the Bronze Age, copper ore passed through Ugarit en route from Cyprus to Mesopotamia. Ugarit had important contacts with the Hittites of Asia Minor and with the Egyptians. It served as the crossroads between Mediterranean culture and the world of the Sumerians and Akkadians in Mesopotamia. With the coming of the Iron Age to the Near E., copper lost its importance and Ugarit lost its position as a major trading port.

The bay known as Minet el‑Beida is located just fifty nautical miles opposite the point of the island of Cyprus (see table 1). Ugarit, the port town of that bay, is known to have been occupied as early as the fifth millenium B.C. Sargon of Akkad (ca. 2060 B.C.), and rulers of the Third Dynasty of Ur (ca. 2060‑1950 B.C.) appear to have had contact with Ras Shamra. The pottery discovered among its ruins has definite Mesopotamian influence.

Between 2400 and 2300 B.C. the city was burned and its older population was displaced. Amorites and Semitic Canaanites migrated northward and the Canaanite people known to us as Phoenicians settled along the Mediterranean coast of north­ern Syria. The Phoenicians controlled Cyprus at this periodand Cypriote pottery is identical in design with that found at Ras Shamra.

Niqmad I and Yagarum I are said to have ruled Ugarit during the nineteenth and eighteenth centuries B.C., but we have no records from this period. The successors of these early rulers, did rule from the fourteenth century until the end of Ugaritic power (ca. 1200 B.C.). Royal correspondence discovered at Ras Shamra mentions golden vessels and other items which Niqmad II sent to the Hittite ruler, Suppiluliuma. While paying tribute to the Hittites, Niqmad also maintained an alliance with Egypt. Ugarit was caught between two great powers – Egypt and the Hittites – and each sought to control her. Ugarit seems to have been quite successful in her efforts to placate (a Peace) the rivals and maintain peaceful relations with both.

It was during the reign of Niqmad II (ca. 1360 B.C.) that Ugarit was destroyed by fire. After the fire the city seems quickly to have recovered its prosperity. It was under Hittite domination for a time but came under Egyptian control with Ramesses II (ca. 1290‑1224 B.C.). During the reign of Niqmepa or Ammistamar II a fire destroyed a portion of the palace. The Hittites were responsible for the fire.

The reign of Ammistamar II was marked by growing trade with Crete. Ammistamar II was succeeded by Ibirana, and he by Niqmad III. Another ruler bearing the name Hammurabi is known, but his relation to the Niqmad dynasty is uncertain.

Tension between the Hittites and the Egyptians became acute during the 14th and 13th centuries and Ugarit was caught in the middle. After 1360 B.C. Ugarit had to acknowledge Hitt­ite suzerainty and paid tribute. Still Ugarit tried to main­tain friendly relations with Egypt. After the battle of Kadesh, fought to determine whether Hittites or Egyptians would control Syria, Ugarit enjoyed its final period of prosperity.

We learn from an Assyrian letter discovered at Ras Shamra that Ugarit was governed by a queen during the thirteenth century. Ugarit was friendly with Assyria at the time. Tow­ards the end of the thirteenth century, and the beginning of the twelfth century, northern Syria was overrun by ”Sea People” a term used in Egyptian writings to describe invaders from the Balkans and the plains north of the Black Sea who entered northern Syria and pushed southward. It is probable that many of the Aegean, Mycenaean, and Cypriote inhabitants of Ugarit sought refuge in their native lands at the time. There is no record of the battle, but we know that the Sea Peoples destroyed Ugarit.

Economic as well as political reasons help to account for the end of Ugaritic history ca. 1200 B.C. when iron began to replace copper as the metal used in the manufacture of tools and weapons. When copper was no longer needed, Ugarit lost its importance.

After the destruction of Ugarit, the port city never regained its ancient position. There are some evidences of occupation during the tenth century and Greek merchants of the sixth and fifth centuries are known to have stopped there. It was they who named the port Leucos Lime (white harbor). A large number of archaic Greek coins dating to the second half of the sixth century has been found. Later settlements, how­ever, were insignificant and the site was used for farming until the spectacular discovery in 1929. 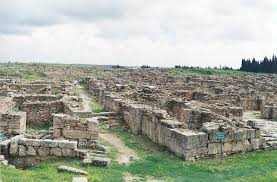 In the spring of 1928, a Syrian peasant who was plowing near the coast of the Mediterranean Sea, seven miles north of Latakia, discovered an ancient tomb that lay just beneath the surface of his field. He then notified the Director of Anti­quities of the French mandate government. After a preliminary investigation of the discovery it was noticed that the roof of the tomb was constructed in a corbeled fashion similar to the design of tombs of the Mycenaean culture that had been discov­ered earlier on the isle of Crete. An archaeological expedition under the direction of Claude F.A. Schaeffer arrived at the site in late March of 1929.

The first six weeks of exploration was disappointing. The number of tombs that were found indicated that a sizable community had existed in the area. The archaeologists then turned their attention to a small hill located approximately a mile to the south, which the local populace called Ras Shamra (fennel head), after the aromatic shrub that grew profusely across it. Ras Shamra proved to be a tell sixty‑five feet high which covered some seventy acres. The ruins of a small harbor town were also discovered less than a mile away on the shore of the small bay Minet el‑Beida (White Harbor). Although the bay is inadequate for modern shipping, it had served the needs of the craft of antiquity.

The excavations met with immediate success. It brought to light the royal tombs of Urgant, two large temples, monumental ruins of civic buildings and royal palaces began to appear, and artifacts (profusion of pottery and occasional bronze articles) illustrating international commerce between Ugarit, Egypt, Mesopotamia, the Hittites of Asia Minor, and the Cretan Mycenaean areas. All these remains indicated that the city which had occupied the site had been very rich in material culture. The most significant discovery was the library with inscribed in several Near eastern languages, including the previously unknown Semitic language known as Ugaritic written in an alphabetic cuneiform script.[1] The contents of the tablets could be determined only by deciphering the script. Fortunately, the process of deciphering was one of the shortest on record. The first tablet was recovered on May 14, 1929.[2]

The documents that were found in this library (later to be augmented by new discoveries), provided important infor­mation on the history and customs of ancient Syria, the nature of Canaanite religion, and the meaning of Biblical vocabulary (Hebrew) which became meaningful in the light of Ugaritic usage. The newly discovered alphabetic script provided mat­erial for the study of the origins of alphabetic writing. 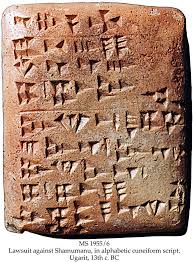 The room in which the texts were found appears to have served as a library. It was situated in a building located between the two great temples of ancient Ugarit – one dedicated to Baal and the other to Dagan.

Other things that were discovered was a pile of seventy-­four bronze weapons and tools at the foot of a cellar stairway. A number of the most beautiful of the weapons contained in­scriptions in the cuneiform alphabet which had been used on the clay tablets.

Schaeffer’s excavations at Ras Shamra have revealed five major periods of occupation at the site. Flint and bone implements from level five are associated with the prepottery period of Neolithic times. Level four corresponds to the Chalcolithic era; painted pottery associated with the Halation period of Mesopotamia culture was found at this level. The third level has been dated to the last half of the third mil­lennium B.C., when the city was destroyed by fire; the sub­sequent reoccupation continued to approximately 2100 B.C., Khirbet Kerak ware was associated with the last phase of level three. The upper two levels (ca. 2100‑1500 and 1500­-1200 B.C.) are of predominant interest because the city bore the name Ugarit through this period. It is probably that the myths and legends contained in the literary texts were origin­ally created by the inhabitants of level two, but the extant text are to be dated to level one, the last level of occupation and the period in which Ugarit reached the heights of its literary and cultural achievements.

1. Most of the tablets were written in this previously unknown alphabetic script which dates back to the same Amarna period.

2. By June 4, 1930, a partial deciphering had been publish­ed by a German scholar, Hans Bauer, whose work was based in part upon the earlier findings of Charles Virolleaud.